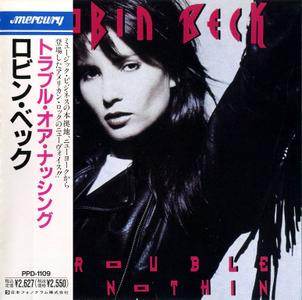 Trouble or Nothin' is a 1989 album by female artist Robin Beck. It was produced by Desmond Child and recorded and mixed by Sir Arthur Payson. Robin Beck is an American singer. She topped the singles chart in the United Kingdom in 1988, and Germany in 1989, with her single "First Time", which had come to the public's attention via its use in a Coca-Cola commercial. Other well-known songs of hers are "Save Up All Your Tears", "In My Heart to Stay", "Tears in the Rain" and "Close to You". Also, "First Time" was successfully covered or sampled many times, the most recent was made by Sunblock in 2006, peaking at number nine on the UK Singles Chart. Beck also performed it with German pop star Helene Fischer. 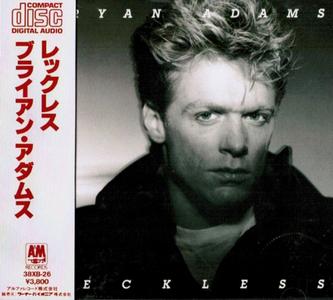 Reckless is the fourth studio album by Canadian singer-songwriter Bryan Adams. Released on 5 November 1984 through A&M Records, the album was co-produced by Adams and Bob Clearmountain, and it was arguably Adams' most successful solo album. The album was a huge international hit, selling over five million units in the United States alone and twelve million worldwide. It was the first Canadian album to sell more than one million units within Canada. The album reached number one on the Billboard 200 and reached high positions on album charts worldwide. 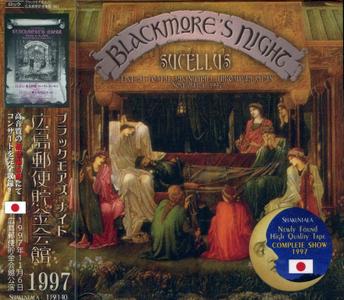 Legendary Deep Purple and Rainbow guitarist Ritchie Blackmore shifted his musical focus away from hard rock in the late '90s and started concentrating on his love of Renaissance-era music. He formed Blackmore's Night with his fiancée, vocalist/lyricist Candice Night, and recruited other musicians from around the world to combine elements of world music, Renaissance, new age, folk, and rock & roll. Blackmore didn't exactly retire his Fender Stratocaster, but he plays acoustic guitar almost exclusively in Blackmore's Night. His acoustic guitar melodies and Night's clear, ethereal voice blend with a host of instruments such as mandolins, keyboards, pennywhistles, violins, tambourines, military drums, and hurdy-gurdies. Blackmore once described the band's sound as "Mike Oldfield meets Enya." 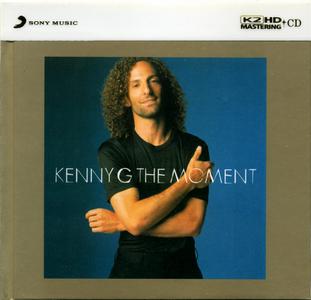 Although The Moment followed four years after Kenny G's blockbuster Breathless, the saxophonist didn't change his approach at all during his time off. Kenny G remains a sweet, melodic instrumentalist, who works entirely in lush, slick adult contemporary pop settings. His playing has improved somewhat in those four years – he soars and dives with effortless skill, and his vibrato remains fleet and elegant – yet after The Moment is finished, you wish that he had tried some new musical territories. That said, it is true that The Moment ranks second to only Breathless in terms of sheer consistency in Kenny G's catalog, thanks to the sustained vision of producer Babyface. Of particular note are the two vocal collaborations (Babyface's "Everytime I Close My Eyes," Toni Braxton's "That Somebody Was You"), which are the best duets to yet appear on any of Kenny G's records. 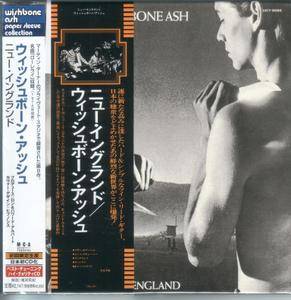 New England is the seventh studio album by rock band Wishbone Ash. It was a success compared to the band's Locked In album, but still did not chart as high as most of their previous albums. This album would mark the "Americanization" of Wishbone Ash, as the band would relocate from England to the Northeastern United States (New England) for tax purposes. New England contained an even balance of hard rock songs and breezy, soft rock ballads, the latter of which would see further exploration from Wishbone Ash on their next studio album, Front Page News. 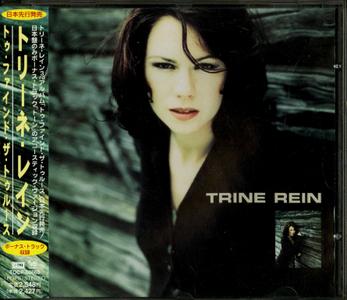 “To find the Truth” is Trine Rein’s solo album of the 90’ies, and was entirely recorded in LA, California to be released in 1998. The album includes songs like ‘World Without You’ (later recorded by Beth Hart), ‘David’ and ‘Stars And Angels’, and Trine Rein had the honor of working with people like Louise Goffin, Guy Roche and Shelly Peiken, among others. Scott Cutler and Anne Previn were also involved on this album. The great Norwegian influence in this particular album cover, video and press pictures symbolize Trine’s passion for her childhood country, and her need to share the beauty of Norway with fans across the world. 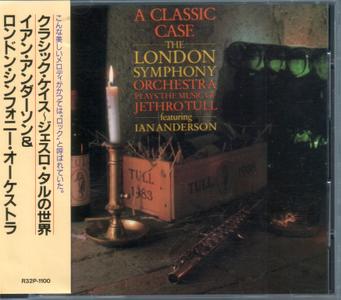 A Classic Case is an album by Jethro Tull, playing with the London Symphony Orchestra, released in 1985. The music was arranged and conducted by David Palmer, who had been a member of the group from 1976 to 1980. The album features band members Ian Anderson, Martin Barre, Dave Pegg and Peter-John Vettese. The album was recorded during the summer of 1984 at the CBS Studios in London. It was released on 31 December 1985 in the United States, where it reached #93 in the charts. 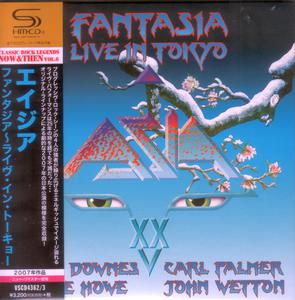 Then & Now is a compilation album by British rock supergroup Asia, released on 14 August 1990 by Geffen Records. It consists of two parts titled as Then and Now. Then comprises songs from the band's first two albums, Asia and Alpha, which featured the band's original line-up of Geoff Downes, Steve Howe, Carl Palmer, and John Wetton. Now comprises songs recorded by the band after Howe's departure (including "Voice of America" from the band's third album, Astra). 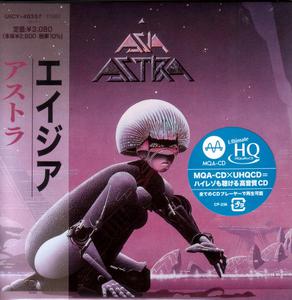 Astra is the third studio album by British rock band Asia, released in late 1985. It was the final studio album to feature original member John Wetton until 2008's reunion album Phoenix. The recording of the album took place at several studios in London during 1984-85. It reached #67 in the US on the Billboard 200 chart and #68 in the UK Albums Chart. Strangely, although Astra itself didn't make the top 50, two songs charted well on the US Hot Mainstream Rock Tracks chart, receiving radio airplay in various markets: "Go" (#7) and "Too Late" (#30), and the video of "Go" (based on the futuristic heroine on the album cover) received airplay on MTV. Allmusic critic Matt Collar gave Astra a three-star rating in a review full of praise. He called the album "a solid prog rock outing", "a truly underrated '80s rock album and a must-hear for fans". 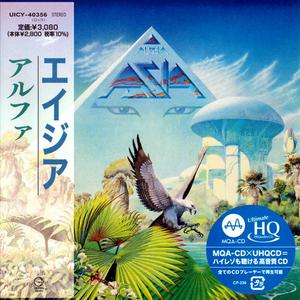 Alpha is the second studio album by British rock band Asia, released in 1983. It was certified platinum in the United States, eventually selling close to two million copies. Released one year before the departure of guitarist Steve Howe, Alpha was the last album with the band's original line-up until 2008's Phoenix, after the original members reunited in 2006, and the last album with Howe until Aqua in 1992. Alpha was written by the songwriting tandem of John Wetton and Geoff Downes, with the exception of "The Smile Has Left Your Eyes", which was written by Wetton alone. Alpha was recorded during the spring of 1983 at Le Studio in Morin Heights, Quebec and Manta Sound in Toronto. 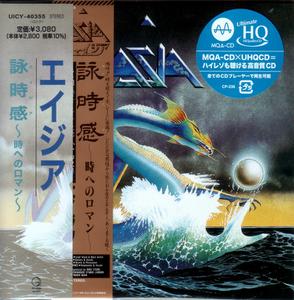 This marriage of four players with impressive pedigrees proved to be the success story of 1982 when Asia's debut lodged itself at the top of the U.S. album charts for two months. The album spawned a massive number four single in "Heat of the Moment," a follow-up Top 20 hit in the sweeping "Only Time Will Tell," and a handful of other tracks that received heavy radio play despite going against the grain of the new wave styling of the day. Produced by Mike Stone, Asia's strengths were the powerful vocals of John Wetton, the nimble, classically tinged guitar work of Steve Howe, Geoffrey Downes' majestic keyboard playing, and anchoring the band, Carl Palmer's propulsive drumming. The lyrics are overwrought at moments, but there's no denying the epic grandeur of the music, which provided some much-needed muscle to radio at the time, and did so with style. 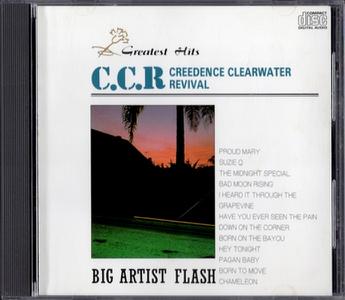 Creedence Clearwater Revival was an American rock band active in the late 1960s and early 1970s. The band consisted of lead vocalist, lead guitarist, and primary songwriter John Fogerty, his brother rhythm guitarist Tom Fogerty, bassist Stu Cook and drummer Doug Clifford. Their musical style encompassed the roots rock, swamp rock, and blues rock genres. Despite their San Francisco Bay Area origins, they played in a Southern rock style, with lyrics about bayous, catfish, the Mississippi River, and other popular elements of Southern United States iconography, as well as political and socially-conscious lyrics about topics including the Vietnam War. The band performed at 1969's famed Woodstock Festival. The band has sold 26 million albums in the United States alone. Rolling Stone ranked the band 82nd on its list of the 100 greatest artists of all time. 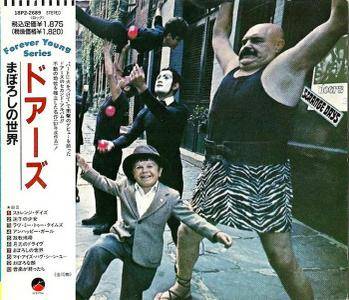 Frontiers Music Srl is proud to announce the upcoming second album, "Powerzone" from red hot British rock singer Chez Kane. The album follows Chez's incredibly well received self-titled debut album, which was released in March of 2021. Fans of Chez's debut can expect all the things they loved about that album to once again delight them on "Powerzone", but turned up to 11! Chez' star really rose, deservedly so, with the release of her self-titled debut album and with "Powerzone", she's really ready to launch into orbit. Armed with an incredible voice, a downright charming personality, a talented backing band, and the guiding hand of producer Danny Rexon, "Powerzone" is primed to be THE melodic rock album of 2022.